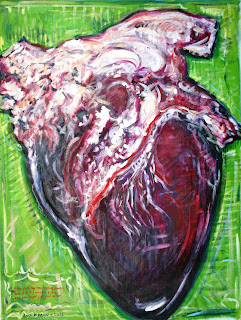 The spring of 2020 has been one of the most creative periods I’ve experienced in my almost three decades of painting. The last time I have had a creative surge of this kind happened more than a decade ago, and it led to a large body of works created in 2009-2010. In the years that followed, my  output diminished, though I did create a few pieces that I consider as highlights. By 2014, however, I encountered something of a dead end that led to my giving up studio rental, and I all but abandoned making large-scale painting since. The pieces I was working on at that time I rolled up unfinished, and whatever was in stock I tried to get rid of as soon as I could. I’m not in a habit of keeping my own finished work around too long because I can’t really look at it once it’s done. The reasons that I ‘quit’ at that point were practical: I could no longer afford the quickly rising rent of the studio, and any there were no art sales to speak of after the financial crisis of 2008. Above that was a
2 comments
Read more